During these unprecedented times, Community Connections has joined the concerted community effort to slow the spread of COVID-19. ​

helped Tyler realize that he can have goals and dream again. With their encouragement and guidance, he researched what he needed to finish high school and successfully earned his high school diploma. With the help of CCI Direct Support Professionals Sandy, Ashley, and Danielle and Nurse Melissa, Tyler realized that there was no one holding him back but himself.

Today, Tyler has not had a seizure in over a year, has two part-time jobs, loves to write poetry and sketch, and dreams of working
in law enforcement. He recently completed an English 121 college course to improve his writing. “Writing makes me happy and everyone at Community Connections says I am good at it!” he boasts. It all takes practice for Tyler: writing, drawing, shopping for groceries, and learning to get around. “I want to learn how to do everything on my own. I thought I would never be able to do anything on my own again. With CCI, I found and have proved to myself that I can do all these things and more, and even help other people find hope.”

At 13 years old, Tyler was a typical ranch kid: going to school, helping his dad on the farm, driving tractors, feeding livestock, and being, well, a boy. Until the day he started getting seizures. They started out small and progressively got worse. With no insurance or established doctor, he went untreated. At 15, his epilepsy was so severe that his family stopped sending him to school, and he spent the majority of his time in the basement of his home for the next 3 years. He would have Grand Mal seizures on a regular basis, causing him to black out often and for long periods of time. Finally, his sister realized that Tyler was not getting better and took him from his home to Community Connections in Cortez. They facilitated an emergency transfer to
Grand Junction in March of 2014 where he spent the next two months being treated for epilepsy. It was then that Tyler realized he not finished high school and feared he would never be able to do anything on his own again.

After finding the right  medications to treat his seizer disorder, Tyler returned to Cortez. Scared and unsure of what the future held, Tyler moved in with a host family facilitated by Community Connections. His host family and the staff at CCI have

I am a poet, determined, and wanting more. 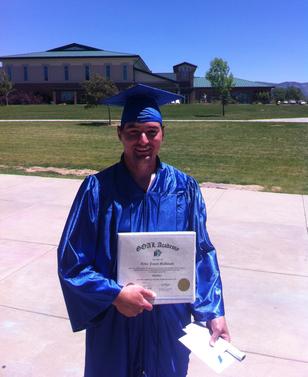