During these unprecedented times, Community Connections has joined the concerted community effort to slow the spread of COVID-19. ​

found the courage to try to get her GED. She studied hard and took the test, but the math portion proved to be challenging, especially with her learning disabilities and severe anxiety. But she didn’t give up. With the support of her grandmother and Melissa, she studied harder and told herself she would not fail. She did not: on June 19, 2013, Rhiannon received her General Education Development Diploma- the accomplishment she is most proud of.

Now, she is studying to be a medical assistant through Utah State University’s Unlimited Learning Center/ Distance Learning Program, and wants to work in the ER once she graduates. Last semester she earned a 3.0 GPA. Over the past 3 years, Rhiannon feels she has received more than just services from CCI; she has received support, guidance, and encouragement. Rhiannon now has the ability and resources to set goals and the confidence to achieve them!

Walking in the door of Rhiannon Uhler’s home, adorned with a cheerful purple bow, you are greeted by a young, bubbly Rhiannon and her very social cockatoo, Bella. She is kind, confident and caring, and very proud of her recent accomplishments. You would never think that just two years ago she wasn’t sure if she would ever get her GED and be on the path to her dream job. But here she is.

Throughout high school, Rhiannon moved quite a bit throughout Arizona and Colorado. Due to learning disabilities, she struggled to keep up with the workload, catch up on what she had missed between school districts, and didn’t have the support to keep her on track. She always wanted a profession in the medical field, but without her high school diploma, she thought that was an unattainable goal.

Landing in Cortez with her grandmother, she found Community Connections, and with the encouragement of her Direct Support Professional, Melissa, she

I am independent, athletic and loving. 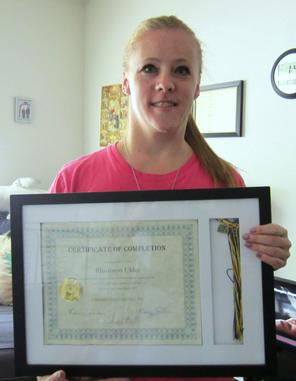