Supporting, advocating for, and transforming the lives of people with disabilities in Southwest Colorado since 1985.

So when his 15 month checkup came we were sent to have him completely checked over by another doctor. Reading through the lists of things that he should be able to do and couldn’t was heartbreaking. As the doctor went down the list and we continued to say, "No" to every task, I felt sicker and sicker. He had global developmental delay, which means physically, mentally, orally, etc. he was way behind. A blood test later confirmed that he was missing a big chunk of his 7th chromosome and that seemed to be the source of the delays. It was overwhelming to have a confirmed diagnosis for my worst fears, but unfortunately the diagnosis did not bring any other answers. It turns out my husband and I are the world’s leading experts on his particular genetic disorder, and no one could tell us what the future would hold for Daven. Would he catch up? Would he ever crawl? Talk? Walk? Play sports? Marry? Would he be our baby forever?

Thankfully, the doctor, with our permission, sent our case information over to Community Connections. Debra Ewing called me that same week and asked if they could come and talk with us at our home. She brought in 2 therapists to play and assess Daven for therapy options. It was determined that he would need physical, occupational, and speech therapy weekly. And by the end of the month, we were scheduled with three different therapists to come to our home every week and work with Daven. I couldn’t believe how fast everything moved with Community Connections. The response to our needs was immediate. And now after being in the medical community for Daven, I see how rare that is (seriously, it took 6 months to get an appointment with a geneticist at Children’s Hospital in Denver…6 months!!!). But the help didn’t just stop with getting Daven into therapy. The therapists, Susan, Linda, and Linda, pretty much became my best friends throughout that first year. Mostly because we see them every week, but also because they listen to my concerns and frustrations and fears pouring out of a mama’s heart; they gave advice and encouragement when all I wanted to do was see the negative; they have not quit when Daven was posing a challenge, but would research and brainstorm what new toy, task, walker, might get us over the hump; and they include my daughter in everything, since Daven gets so much attention, and make sure she knows she is special too.

Community Connections helped find extra money to get us over to Children’s Hospital. They constantly ask what we need as a family to help us all to be successful. They have helped me learn how to be an advocate for my child. Debra calls me monthly to check in on our family and see what we need. And they find answers for me, when I don’t know what doctor or test or which facility I need. They have connected me with other families in similar situations. My family could not have made it through this last year without the support and care of Community Connections. At a time when we had no idea of what to do, they stepped in and helped us make a plan. They helped us to set goals for Daven, and gave us the keys to make things work for our family during a new and crazy time. With their help, Daven is now meeting his goals and surpassing them! He has come far, with a lot of hard work on his and everyone else’s part. We feel much more hopeful for his future and want to say a big THANK YOU to our ladies: Debra, Linda, Susan, and Linda, and all of Community Connections!

Through the words of his mother

We were so excited when Daven was born. He was our second child and first son, so of course we were full of expectation and hope for our boy. Daven was all smiles and sweetness, and as expected was a little different than our first baby, not hitting milestones when she did, but we told ourselves that all babies grow differently. By one year old, though, the concern that not everything was right was also voiced by our doctor. She said if he wasn’t moving more or vocalizing by 15 months, then we would need to take him in to be assessed.

I am determined, adventurous, and independent. 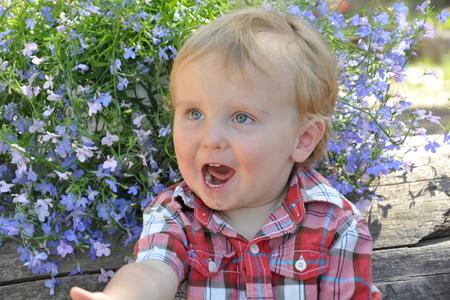